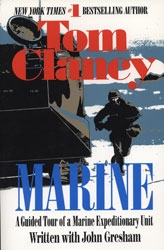 A Guided Tour of a Marine Expeditionary Unit
By Tom Clancy
Published by Berkley
Buy from:

Only the best of the best can be Marines. And only Tom Clancy can tell their story--the fascinating real-life facts more compelling than any fiction. Clancy presents a unique
insider's look at the most hallowed branch of the Armed Forces, and the men and women who serve on America's front lines.