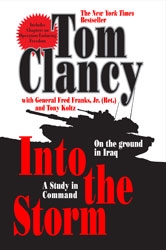 On the Ground in Iraq
By Tom Clancy
Published by Berkley
Buy from:

In his brilliant, bestselling novels, Tom Clancy has explored the most dramatic military and security issues of our time. Now he takes readers deep into the operational art of war with this insightful look at one of America's most important military engagements in recent years: the Gulf War.

Never before has the art of maneuver warfare been explored so incisively and in such rich, provocative detail. Clancy and General Frederick M. Franks, Jr.-commander of the main force that broke the back of the Republican Guard-take us deep inside the war councils and command posts and up to the front lines. They give us a war that few people really knew-and that television never showed.