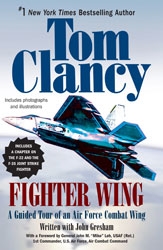 A Guided Tour of an Air Force Combat Wing
By Tom Clancy
Published by Berkley
Buy from:

Now, for the first time, an insider's look at an Air Force combat wing--the planes, the technology, and the people--with Tom Clancy as your guide. Tom Clancy's previous explorations of America's armed forces, Armored Cav, revealed exclusive, never-before-seen information an the people and technology that protect our nation. Now, the acclaimed author of takes to the skies with the U.S. Air Force's elite: the Fighter Wing.

With his compelling style and unerring eye for detail, Clancy captures the thrill of takeoff, the drama of the dogfight, and the relentless dangers our fighter pilots face every day of their lives, showing readers what it really means to be the best of the best.