Every Man A Tiger 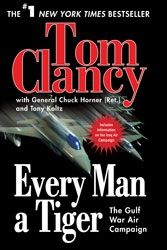 The Gulf War Air Campaign
By Tom Clancy
Published by Berkley
Buy from:

General Chuck Horner commanded the U.S. and allied air assets--the forces of a dozen nations--during Desert Shield and Desert Storm, and was responsible for the design and execution of one of the most devastating air campaigns in history. Never before has the Gulf air war planning, a process filled with controversy and stormy personalities, been revealed in such rich, provocative detail. And in this revised edition, General Horner looks at the current Gulf conflict--and comments on the use of air power in Iraq today.