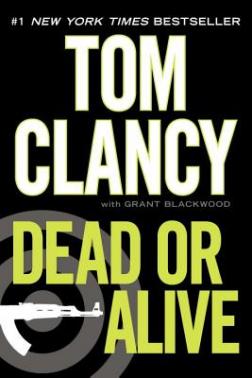 By Tom Clancy & Grant Blackwood
Published by Berkley
Buy from:

After almost a decade, Tom Clancy—the acknowledged master of international intrigue and non-stop military action—returns to the world he knows better than anyone: a world of chaos, caught in the crossfire of politics and power, placed on the edge of annihilation by evil men.

But there are other men who are honor-bound to stop the bloodshed and protect their homeland—by any means necessary...

It is called the Campus. Secretly created under the administration of President Jack Ryan, its sole purpose is to hunt down, locate, and eliminate terrorists and those who protect them at will, without sanction or oversight. A self-sufficient entity, it has no official connection to the American government—a necessity in a time when those in power consider themselves above such arcane ideals as loyalty, justice, and right or wrong.

Covert intelligence expert Jack Ryan Jr. and his compatriots at the Campus have waged this silent war in every corner of the world. Now joined by two of his father’s closest allies—black ops warriors John Clark and "Ding" Chavez, as well as Brian and Dominic Caruso and Mary Pat Foley—the Campus has come up against its greatest foe: a sadistic killer known as the Emir.

The mastermind of countless horrific attacks, the Emir has eluded capture by every law enforcement agency in the world—a fact which the Campus is determined to change. But his greatest devastation is yet to be unleashed, as he plans a monumental single strike that will destroy the heart of America, unless the Campus can take him Dead or Alive.

On the trail of the Emir, Jack Ryan Jr. will find himself following in his legendary father’s footsteps on a deadly manhunt that will take him and his allies across the globe, into the shadowy arenas of political gamesmanship, and back onto U.S. soil—in a battle to prevent the fall of the West...

Together for the first time, an all-star cast of Tom Clancy’s characters race to ensure the nation’s survival and to complete their mission: the desperate search for a madman who may be hiding in plain sight.

“The best characters from all of Clancy’s previous novels are on the case.…For fans of the genre, Dead or Alive is likely to provide a long weekend’s pleasure.”—Los Angeles Times

“Clancy is back at the top of his game…In-depth research, continuous suspense, and scores of fascinating characters.”—Publishers Weekly (starred review)