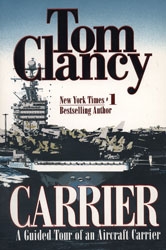 A Guided Tour of an Aircraft Carrier
By Tom Clancy
Published by Berkley
Buy from:

They are floating cities with crews of thousands. They are the linchpins of any military strategy, for they provide what has become the key to every battle fought since World War I: air superiority. The mere presence of a U.S. naval carrier in a region is an automatic display of strength that sends a message no potential enemy can ignore. Now, Tom Clancy welcomes you aboard for a detailed look at how these floating behemoths function. With his trademark style and eye for detail, Clancy brings you naval combat strategy like no one else can. Carrier includes:

Plus: An interview with the U.S. Navy's Chief of Naval Operations, Admiral Jay Johnson