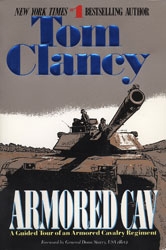 A Guided Tour of an Armored Cavalry Wing
By Tom Clancy
Published by Berkley
Buy from:

A penetrating look inside an armored cavalry regiment -- the technology, the strategies, and the people... profiled by Tom Clancy.

His first non-fiction book, Submarine, captured the reality of life aboard a nuclear warship. Now, the #1 bestselling author of Clear and Present Danger and Without Remorse portrays today's military as only army personnel can know it.

With the same compelling, you-are-there immediacy of his acclaimed fiction, Tom Clancy provides detailed descriptions of tanks, helicopters, artillery, and more -- the brilliant technology behind the U. S. Army. He captures military life -- from the drama of combat to the daily routine -- with total accuracy, and reveals the roles and missions that have in recent years distinguished our fighting forces.

PLUS: From West Point cadet to Desert Storm commander . . . an interview with a combat cavalry officer on the rise.